What It Takes to Build an Overwater Bungalow

The overwater bungalow concept originated in Tahiti in the mid-’60s, when a group of American expats bought and rebuilt a decrepit Raiatea hotel and creatively repositioned its lack of a beach as a boon, using traditional Tahitian fishing huts as a model to construct stilted bungalows over the calm waters of the reef. The overwater bungalow—of which there are now more than 7,000 worldwide—has since become a symbol of extreme luxury, with price tags to match.

And more continue to spring up, hoteliers undaunted, even as it would seem that extreme weather and environmental concerns might make them harder to build and harder to maintain. Just two years after Hurricane Irma destroyed the island, the Royalton Antigua Resort and Spa opened in July with six plush overwater bungalows—Antigua’s first, and the first in the hotel brand’s portfolio. In the Maldives, oft-reported to be sinking, Waldorf Astoria debuted the Waldorf Astoria Maldives Ithaafushi with 56 ultra-luxurious villas perched confidently above the Indian Ocean. In both cases, sea level rise was a huge consideration—standards for building are three feet higher above sea level than they were just 15 years ago—as was minimizing environmental impact. “We spent months studying the area’s tides, seabed quality, and characteristics, and the underwater fauna and flora,” says Royalton architect Jack Zyman of Mexico City–based firm Zyman & Zyman. In the Maldives, Waldorf Astoria architects worked under a strict Environmental Impact Assessment with an eye toward preserving the increasingly fragile coral reefs. 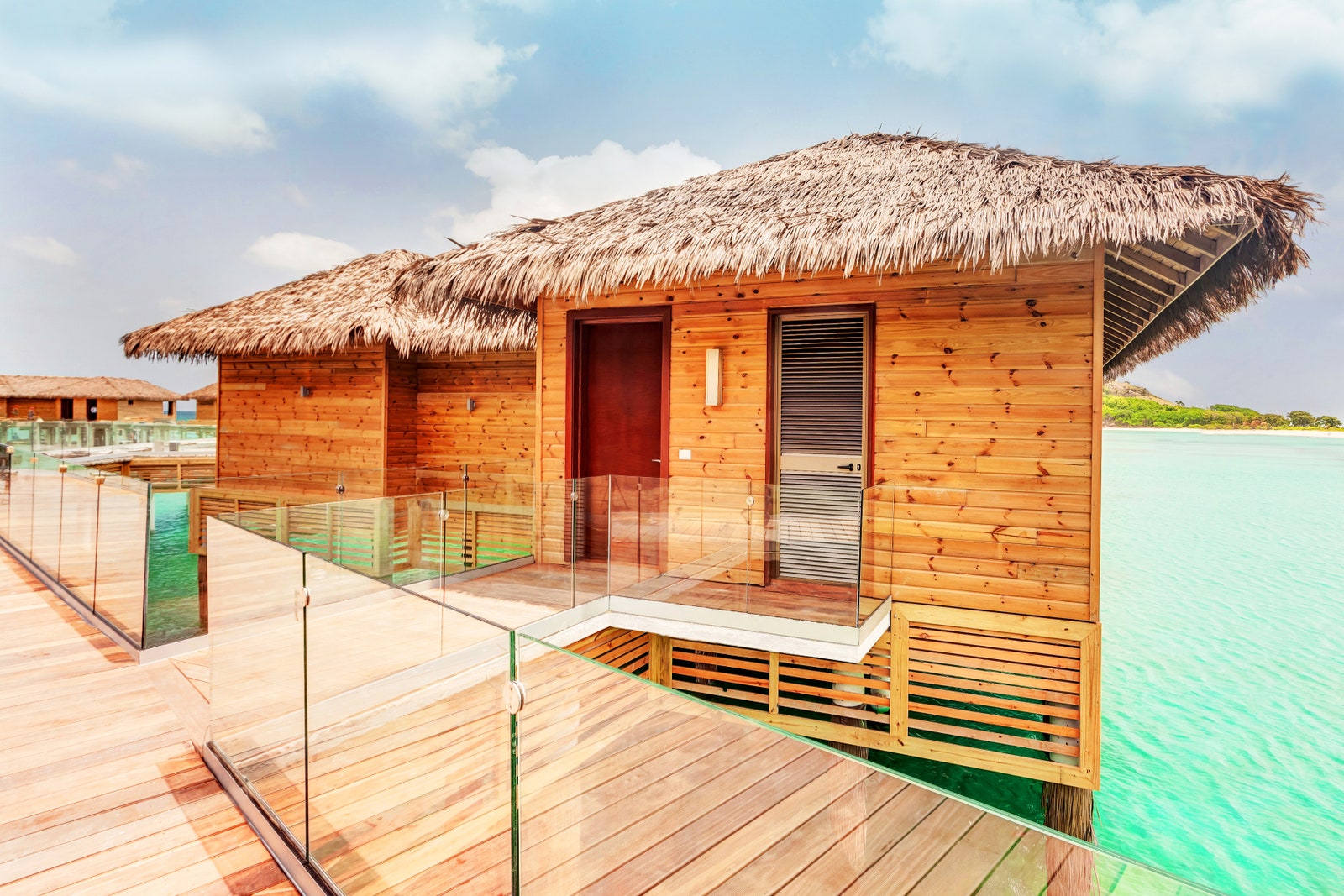 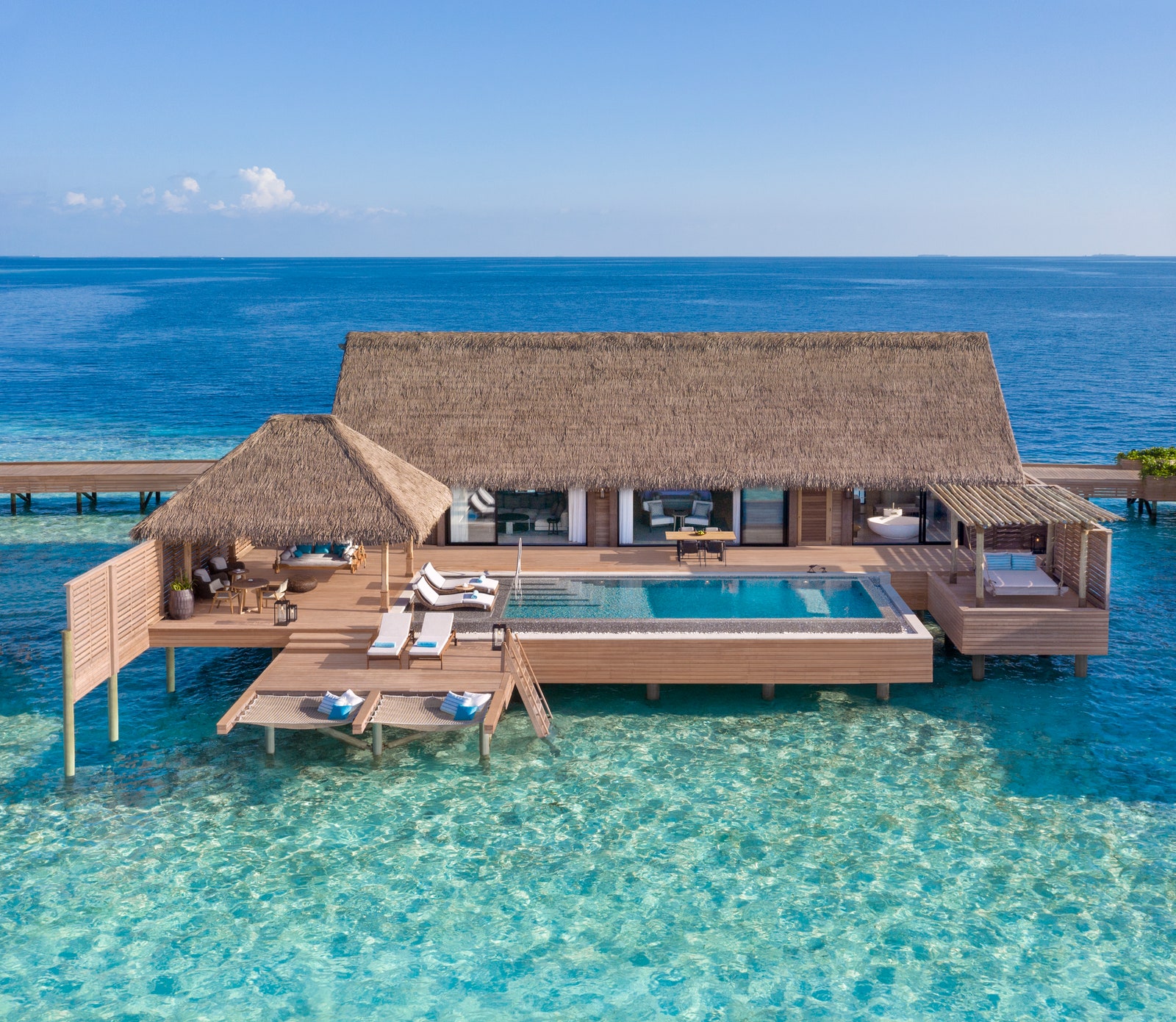 Such measures are fairly new, and add to the general complexity of building, basically, hovering hotel rooms. Yet while modern innovations like 3-D modeling, better excavating equipment, and rust- and salinity-resistant materials have increased the durability of overwater bungalows, the general concept of construction remains as it did when the expats thatched their first overwater roof in Tahiti, even as the earth has become less predictable.

At the Royalton, Zyman and his team called on indigenous construction techniques to design “most efficiently,” he says. The process starts with a survey of the sea base, in order to determine the placement and type of stilts. A sandy ocean floor might require concrete bases beneath each stilt; stronger soil, or a floor made of solid rock, can support piling. “The problem comes—and it always comes—when each of your six or eight different stilts has to be piled at different depths,” says Belgian-born, Malaysia-based architect Jean Michel Gathy, who has designed some of the world’s most memorable overwater bungalows, including those at One&Only at Reethi Rah and Cheval Blanc Randheli, both in the Maldives, and at Aman’s now-shuttered Hotel Bora Bora. The number of stilts matters, too: Too many, says Gathy, might impact not only marine life but also water flow and, ultimately, the shoreline. 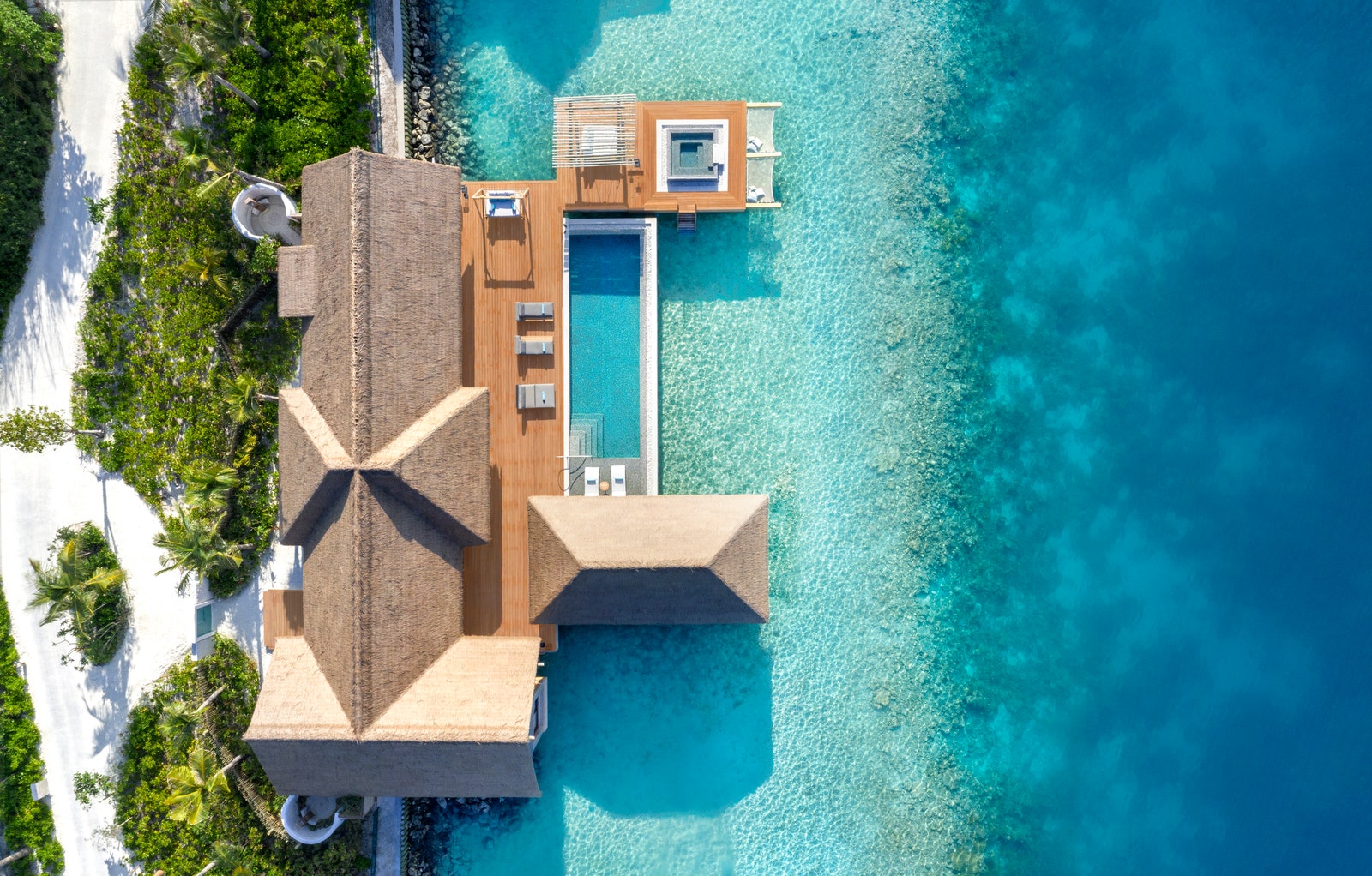 But the biggest build challenge, says Gathy, is typically a logistical one. Simply put, there’s very little workspace. On land, you have space for storage of tools or your pieces of wood. When you build over water, not so much. “So you first have to create a place to store all of your equipment,” says Gathy, “and then you need a bridge to connect that storage area to the site.” To prevent loose pieces of wood or concrete or nails from falling in the sea, you need “platforms under your platforms under your platforms.” All of which requires more labor, more weather protection, more attention to detail, more hassle. “All in all, it is a statistically difficult proposition,” says Gathy. “It’s not easy. Nobody would design an overwater bungalow unless they are crazy.”

One way to minimize drama, while also offering environmental benefits, has been the advent of prefabrication, which reduces carpentry and nail work over the sea. Keeping interior furnishings loose helps, too. “The more you can build and assemble the actual room on land, the better,” says Gathy. “People will be respectful, they will be in control, but building over the sea there is loose cement. There is dust. Someone might use the sea to clean their trough. But if you build in the sea, it’s to celebrate the sea. Not to kill it. So you do your best to minimize the impact.”

An overwater bungalow’s stilts and, below those, foundation are of the utmost import, says architect Jean Michel Gathy, who designed the One&Only at Reethi Rah. Photo: One&Only
Gathy also lent his expertise to the design of overwater bungalows at Cheval Blanc Randheli. Photo: Cheval Blanc Randheli
And although after so many years of being exclusive to the remotest of destinations—and famously pricey per night—more affordable options have begun to appear throughout the Caribbean and Central America—including in Guatemala, Honduras, and Jamaica—one thing overwater bungalows will never be is cheap. “Overwater bungalows can be very, very luxurious,” says Gathy. “As luxurious as you want. They can also be economical. Maybe there’s no air conditioning, or no minibar. But they are just too hard to make happen to ever be inexpensive; there are only certain corners you can cut. And so, ‘affordable’ or less so, they will always be a luxury.”